A man with priorities so far out of whack doesn’t deserve such a fine automobile.

I was listening to Car Talk this morning (we miss you, Tom!), and one of the callers said that he had 103 cars in his lifetime. That got my brain gears whirring, and I thought I would reminisce about the series of vehicles that have graced me with their presence in the last 35 years. 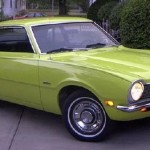 Maverick’s defining feature was that someone had converted it from a standard shift on the steering column to an automatic on the floor…but they had done such a poor job of it that you could see the road underneath the shifter. And in a Maine winter that extra chill was nasty. (Not as nasty as the VW Beetle with no heat owned by Ric the Schmuck though.)

When Maverick died after about six months, I took up the last few payments on my brot

This was back when men were men and Novas were…passable as a “muscle” car. It wasn’t really all that muscular, but it was the last car I ever drove with 6-cylinder engine.

Its most memorable detail was that my dad gave it a new paint job, and to save money he used flat, red house paint. It was…interesting. Definitely not shiny. 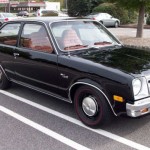 When Nova bit the dust, I went out and bought my first car from a used car salesman. It was a 1978 Chevy Chevette. After riding around in the big ole Nova, I felt like I was literally sitting on the ground inside the Chevette.

Chevette’s main flaw was a wonky starter motor. Every other time you’d try to start it, nothing would happen. Yet, I found that if I touched it with something metal–like a screwdriver–it would ZAP! and spark, then I could start it just fine…most of the time.

One time it wouldn’t, and I just happened to be on a date with my future spouse. She called her mother to come pick us up, and I finally met Helen Patricia Irwin. She was not amused. I left Chevette dead in a convenience store parking lot one day not long after that. 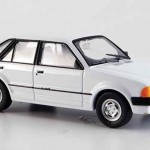 ar to grace my butt was a Ford Escort. I was sort of bullied into buying this car by my dad. He went to the trouble of finding a used car salesman (who I think was a softball buddy or related to one) and a car that I could afford, but I really didn’t want this car.

First off, I think it had been in a flood, maybe even at the bottom of a lake, because it just smelled swampy. And then there was the bloody hand print stain on the headliner above the passenger seat…

Friends, never buy a haunted car (or a Ford). We took this one on our honeymoon (a not-supposed-to-be-rough camping trip during which it poured rain from about 10 seconds after I got the tent up until the day we left). On the last day, we decided to drive down to Boston to visit Venita’s grandparents. Haunty McForderson decided that it didn’t really need that cam shaft and left it behind somewhere on I-93 as we were in the left-most lane.

She called her mother to come pick us up. 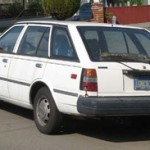 After further adventures with getting Escorty McSuckercar repaired (which involved calling Ford HQ in Detroit to step in between feuding dealerships), we grabbed the next used car that we could find on the day we picked up the Ford from its repair pod. It was a Nissan Sentra wagon, and it served us fairly well for a number of years.

Its defining tick was that the hatchback never latched. So, when you’d hit any kind of bump, it would pop up. Fortunately(?), the hydraulic thingy that kept it open and prevented it from falling on  your head didn’t work either, so it didn’t fly open…it just banged up and down a lot. 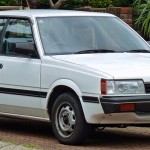 Next came a car so boring that I can barely remember a thing about it except that it was white. I am told that it was a Subaru of some sort.

We bundled the Subaru together with an old, wood-paneled station wagon that I got as payment for helping a small inventory company out with some PC problems, and they were traded for the first (and, so far, only) new car that I ever bought. 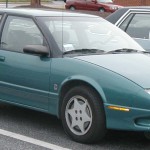 In 1994, we moved to Florida, and since we didn’t have a car that we felt would make the trip, we traded for a Saturn SL1 with 12 miles on it.

And everything that I had heard about Saturn the car company was true. They were super friendly, and they even let me test drive the car, and hearing that I needed to be back at work, they let me take the Saturn to my office and offered to drive both the Subaru and the station wagon (one to my office and the other to my house) and pick up the Saturn later in the day. There was no haggling with a sales dude who needed “approval from his manager” to give me a deal. The price was the price. Buy it or don’t. In fact, the sales guy pointed out that his manager was busy washing my car anyway.

That Saturn stayed with us for over 200,000 miles, and Emily wound up driving it for a while before we finally donated it to the local NPR station. 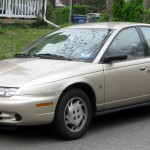 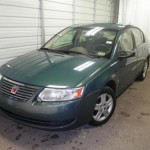 In between, we became a two-car family, buying another Saturn SL, then leasing an Ion for a couple years before buying one.

That latter one became Emily’s for a while after we bought our current cars.

The Prius has given us tons of driving time, including our trip up and through the Blue Ridge Mountains for our 25th anniversary in 2011 and our recent DC adventure. And the Kia…well, it’s a car. 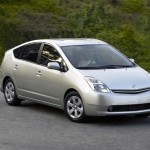 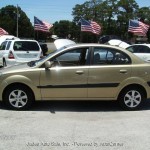 But it’s 2016, man. Our rides are old. It’s time to swap these junkers for something flashy.  Maybe one of these?

This entry was posted in Car Talk, Life, the Universe and Everything. Bookmark the permalink.

2 Responses to A man with priorities so far out of whack doesn’t deserve such a fine automobile.